With the COP26 climate summit in Glasgow less than 200 days away, countries accounting for more than two-thirds of global GDP have now committed to net-zero emissions by the middle of the century. Over half of the 167 world’s largest, systemically important corporate emitters have made similar “net-zero” commitments according to Climate Action 100+, an initiative backed by over 500 investors that jointly represent over $50 trillion in assets under management.

This is stunning change compared to the last “big” COP in Paris six years ago, when few companies were willing to make any promises to reduce their absolute volume of annual greenhouse gas (GHG) emissions—let alone publicly commit to concrete timelines for ceasing such emissions altogether.[1] It’s the remarkable result of concerted efforts from campaigners, governments and investors to convince industries that are at the heart of the problem to become a part of the solution.

Implicit in these net-zero pledges is the commitment from these corporate behemoths—whose combined market capitalization of $4.5 trillion is bigger than the GDP of Germany—to embark on a difficult journey to fundamentally transform their businesses over the relatively short time span of a few decades.

The challenges—and risks—in this transition are enormous. Building a business model that is fit for the low-carbon economy is a tough ask if carbon-intensive activities are hardwired into your organizational DNA. For many of the companies covered by Climate Action 100+, this will require winding down profitable core activities and replacing them with revenue streams from entirely new products and services. In many cases, this will involve huge bets on technologies that don’t yet exist (think zero-emission steel, cement or containerships).

The investors behind Climate Action 100+ are keenly aware of these challenges, but they also understand that there are few viable alternatives. For the largest corporate emitters, decarbonizing early and rapidly is the best shot at successfully navigating an accelerating low-carbon transition that poses existential risks. At the same time, their decarbonization would represent a critical contribution to the global effort of avoiding the worst impacts of climate change, including potentially debilitating, portfolio-wide ramifications for investors.

Sceptics may wonder whether the raft of net-zero commitments from large emitters genuinely expresses an ambition for such transformative change, or whether they are are just the latest incarnation of corporate greenwash in service of business as usual.

This is a question that is surprisingly hard to answer. In the run-up to COP, investors have been faced with a blizzard of net-zero commitments, targets and pledges, with little standardization or consistency.

Last month, these efforts culminated in the launch of the first CA100+ Net-Zero Company Benchmark, which systematically assesses the climate ambitions and actions of 159 of the corporate carbon emitters targeted by the initiative.[2] At the heart of the assessment are nine key indicators that have been assessed by the Transition Pathway Initiative and FTSE Russell. These cover emissions targets (1-4); the decarbonization strategy to meet these targets, including green revenues (5); the alignment of capital expenditures (6); climate lobbying (7); climate governance (8); and alignment with the recommendations of the Task Force on Climate-related Financial Disclosures (TCFD) (10).[3]

The headline results of the assessment are sobering. While over 50% of the assessed companies have now committed to reach net zero by 2050, only around half of those commitments fully cover the companies’ most material emissions; and fewer companies yet are willing to set interim targets for investors to track in the near and medium term. Details on how companies are planning to meet these targets, or clear commitments to align capital expenditures with decarbonization plans, are still the exception rather than the rule.

It is also clear that conducting this exercise is much harder than it should be. Four years after the release of the TCFD recommendations, still no two sets of climate disclosures look alike. Concise, plain-language climate commitments as part of annual filings remain a rare find. Instead, getting to the bottom of a company’s climate position often requires investors to trawl through footnotes and appendixes peppered across press releases, investor presentations, websites, sustainability reports, CDP disclosures, and annual financial filings. 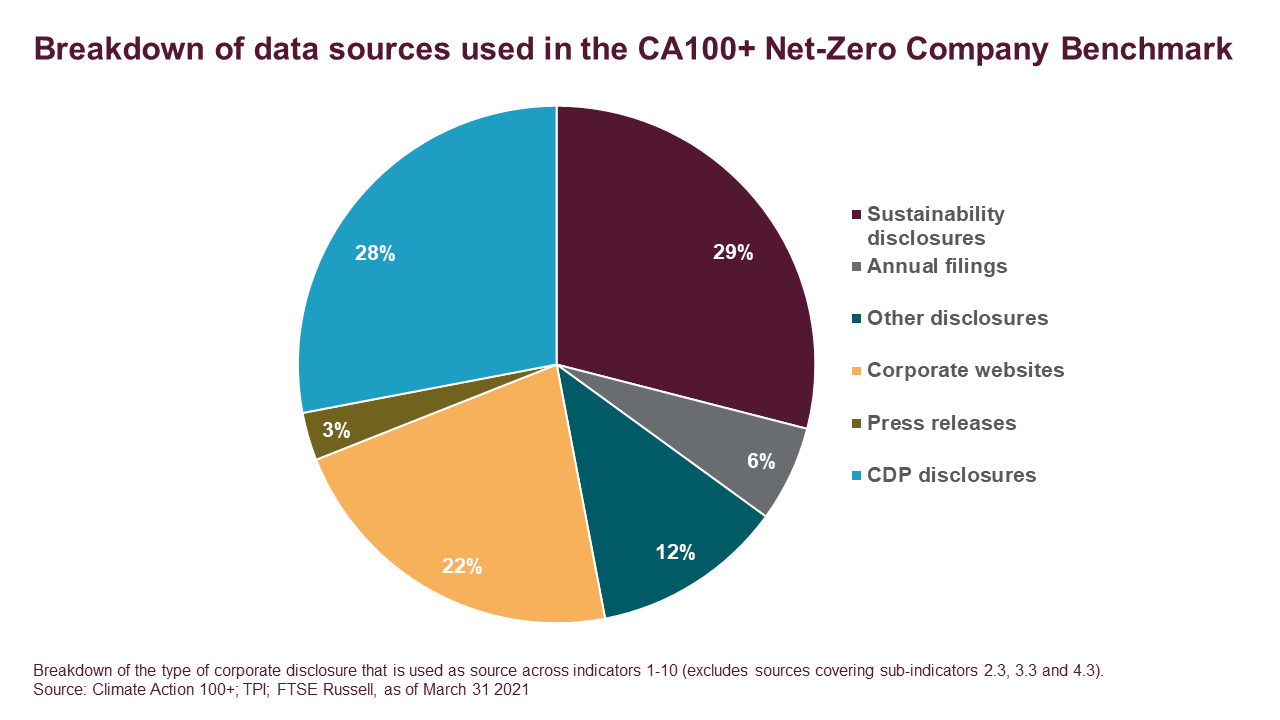 One key takeaway is that agreeing a simple standard protocol for publicly disclosing GHG reduction targets in particular could be a critical quick win, and should be central to the TCFD’s follow-up recommendations that are currently under development.

For sure, greenwash, hyperbole, and ambiguity remain abundant. But it seems to be dawning on a growing number of carbon majors that denial, diversion, or delay are ceasing to be a viable option; and that beginning the long, daunting, and uncertain journey to actual decarbonization— however hesitantly—is now unavoidable.

[1] Net zero is a state where an entity is no longer adding any incremental greenhouse gas emissions to the atmosphere. This requires that any emissions that are produced are balanced by removals from the atmosphere, whether biological carbon sinks such as forests, or technological sinks such as direct air-capture systems.

[2] Eight other companies have been added to the CA 100+ focus list since the assessment exercise began.

[3] An indicator on Just Transition (9) is under development.